Weird Memories from My Childhood

February 14, 2020
What I'm going to write about happened during WW II when I was a kid.

Recently I remembered two girls that went to my grammar school that I thought were beautiful and rather mysterious.

Their names were Lillian and Lorena, though they went by Sugar and Pee Wee.

To me they looked like the enchanted fairies right out of the lovely illustrated books I liked to read. Both had very light blonde hair and were thin and rather wistful. Lorena wore what looked like a part dress to school, one that was too small for her. (Back in the day, we wore the same dress to school for a week, and changed into play clothes when we came home. And yes, girls had to wear a dress.)

One day, Lorena, who was in my class invited me to her house for lunch. I always took my lunch--the same thing every day--half a baloney sandwich and half a peanut butter and jelly sandwich, a banana or other fruit, and 3 cookies.

When I arrived at her home,  which perched on the hillside behind the school (an area I wasn't supposed to go to--the boundary my mother had set was only as far the school). I only saw the front screened in-porch. No one else was home. There were two narrow beds out there and I learned that's where Lorena and her sister slept. I thought, "How grand! Almost like camping."

I shared my lunch and she brought me a bowl of beans--which she told me was her lunch. Wow, I thought, how fortunate to have beans for lunch. Looking back, I'm pretty sure that was all they could afford.

The family moved, to where I have no idea, but the two girls left a big impression upon me. I can still see the Lorena in my mind's eye though she was in my life for such a short time.

Another friend I had who lived near my house, but for only one summer and during the same time period, was named Aurela. She had black hair with sausage curls, and like me, thought it would be a good idea if we became spies. We really thought we would be invaded by the Japanese. We spent a good deal of time making poison in the basement of her home, using liquid fertilizer and everything else we found on the shelves, and putting our concoctions in small bottles.

We also dug a tunnel in the vacant lot next to her house, so we would have a place to hide if need be. Our parents had no idea what we were up to.

When summer was over, Aurela moved away. I still harbored thoughts of being a spy, but my poison making and tunnel digging were over. 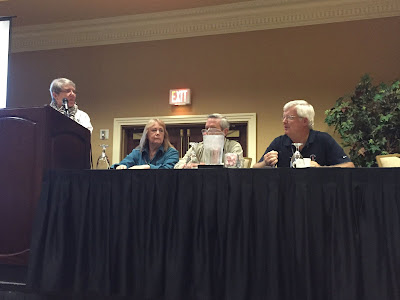 This was another panel topic at the PSWA Conference this year.


On the panel were Eileen Magill, Bob Doerr,  Scott Decker, Michael Brandt, and Sam Bradley. Marilyn Olsen moderatied.
Get everything out first--then do the rewrite.Different author do things their own ways, some editing as they write.Discussed who else might be involved in the rewrite: An editor, critique group, readers. Be careful who you use as an editor.Don't over analyze.One writer sees the story in his mind, then blazes his wayt though the story.Need to make it clear for the reader.Be sure to incorporate dialogue.Be careful not to rearrange chapters ot that big clues come to soon.
What to avoid when rewiring.
Don't fall in love with the first draft.Don't keep rewriting the first three chapters. There was more, but that's all I managed to catch in my notes.