NO BELLS--Help came from a retired cop 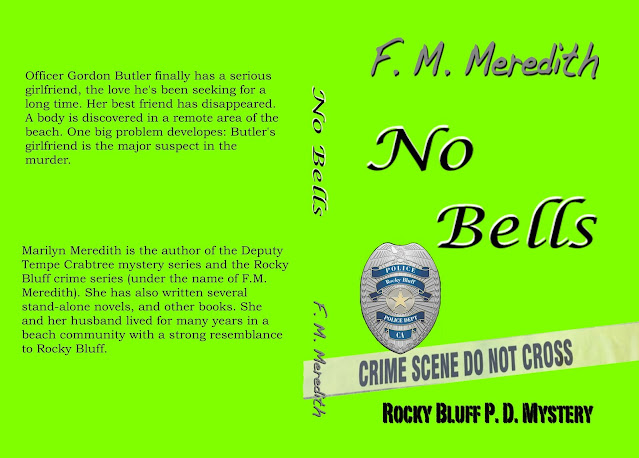 I put out a call to my police friends for a vice crime that was funny. And one of my retired police friends came through with a perfect one which you can read about in No Bells.
In this mystery Officer Gordon Butler takes a starring role. He finally meets the one he's been looking for, a woman to love.
All things seem to be going well for Gordon until his girlfriend becomes the major suspect in a murder case. Though it's not his job, he does his own investigating.
However, as so often happens with Gordon, other calls he has are strange and he continues brunt of jokes by his fellow officers.
One of the important witnesses to what happened to the murder victim is a young man with Down's syndrome--an expert in all kinds of cars. (Because I worked with little ones with Down's for more than 10 years when I taught in a pre-school for developmentally delayed  and  owned and operated a residential facility for women with developmental delays including four with Down's, I like to include folks with Down's in my books when it's appropriate.)
This tale is much lighter than the ones that come before this one, but Gordon Butler's fans love this.
If you're interested,  you can read this one on Kindle or paper--and you can learn why the book is titled No Bells.
https://www.amazon.com/gp/product/B08BXD2FS4?pf_rd_r=WQ8ZPJQHC8M7T7EB33AA&pf_rd_p=5ae2c7f8-e0c6-4f35-9071-dc3240e894a8&pd_rd_r=57f1dc4a-d357-4ad7-8065-ad4db6c9c2ce&pd_rd_w=FFX9L&pd_rd_wg=2RK5v&ref_=pd_gw_unk
Marilyn aka F. M. Meredith
funny vice crime No Bells Officer Gordon Butler