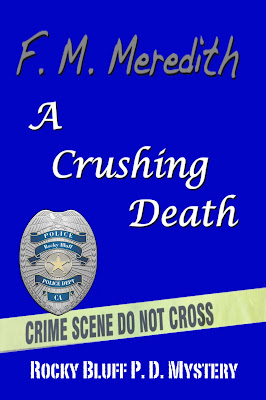 The biggie needing research in A Crushing Death was the manner of death. It was suggested to me by a fellow author, but I needed to find out where it came from and what it actually was.
The research gave the idea for the story.
A beloved teacher is found dead under the condemned pier in Rocky Bluff. The cause of death, a pile of big rocks stacked on his chest. What could possible be the reason for this bizarre murder? And for there the tale is off and running.
I also had to do a bit of research into how schools deal with certain issues.
But this is another tale that involves all the officers of the Rocky Bluff P.D. police force and touches on their families too as you can tell by the blurb:

A pile of rocks is found on a dead body beneath the condemned pier, a teacher is accused of molesting a student, the new police chief is threatened by someone she once arrested for attacking women, and Detective Milligan’s teenage daughter has a big problem.

Home Services said…
Feeling stumped with your data analysis in pay-per-click (PPC) advertising? Perhaps you’re making a common mistake by looking at much more than you need. PPC optimization tools when it comes to getting the greatest return on investment (ROI) from data analysis in PPC advertising, you can save a lot of time and money by just focusing on the areas that are really producing results or not.