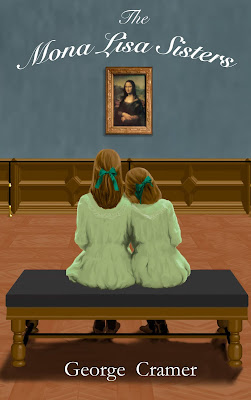 In early 2011, the company I worked for was bought out. Over the next few months, 90% of our employees were laid off. I was one of the last. Looking for work, I learned a great deal about age discrimination. That’s a story for another time. After about a year, I spotted a notice for a writing class at the local senior center, a place I had sworn never to enter. From the notice, I had the feeling it was a resume improvement presentation. Oh, well, swallowed my pride.
The class was about creative writing. I fell in love with the process, and, in addition to taking the local class, I returned to college and began taking English classes.
One afternoon at the senior center, the instructor randomly passed out pictures. The assignment was to describe the setting in fifteen minutes. I couldn’t do it. I was astonished that a story filled my mind. In the time allotted, I had a rough outline of The Mona Lisa Sisters. The title then, and eight-plus years later, it still is.
Until then, all I had written were crime and thrillers. The Mona Lisa Sisters is historical fiction with a touch of romance.
The first draft was like most first drafts, a total mess, requiring more writing classes. One of my instructors was a fan of Joy Harjo. Ms. Harjo is an internationally renowned writer of the Muscogee (Creek) Nation.
About this time, I decided I would pursue an MFA in Creative Writing. I learned that Ms. Harjo was a regular speaker at the Institute of American Indian Arts. I enrolled, met her, and even sat with her one time at dinner.
All this time, I continued to write and rewrite The Mona Lisa Sisters. The novel became my thesis project. I enjoyed the help and guidance of outstanding professors and mentors. This spring, the novel was completed.
* * * * *
The Mona Lisa Sisters, a historical fiction novel of Lura Grisham Meyer, George Cramer’s debut novel, will be released on August 14, 2020.
Lura Grisham Myer lives a perfect life until her world is ripped apart. Wealth cannot protect Lura from the tragedies that befall her in the late nineteenth century. Reborn, forged of pain and misery, she voyages to Paris after months as a recluse in Grisham Manor. There Lura finds new purpose in life when she meets two American girls who face a tragedy of their own.
The Mona Lisa Sisters is available for pre-order. Here is a link to his Amazon Author Page where you can order paperback ($14.99) or Kindle ($3.99): https://rb.gy/j2m46l. 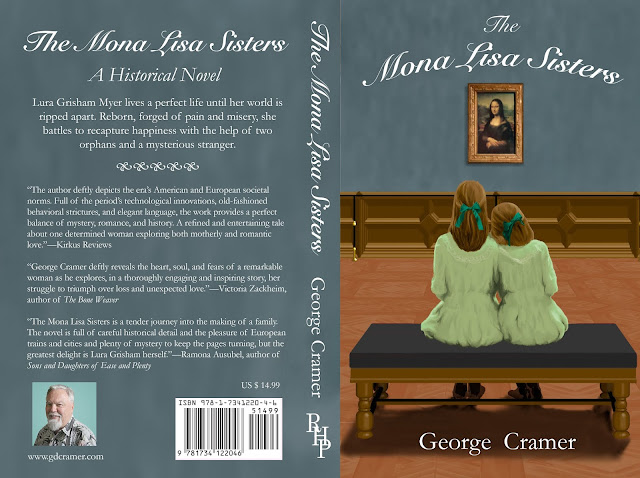 George Cramer was born to a Karuk Indian, a career soldier, one of the last horse soldiers of World War II. George served in the U.S. Navy during the Vietnam War. Completing his military service, George became a police officer, retiring as a sergeant after years working in criminal and undercover investigations. For five years, he volunteered two days a week at a local police department investigating missing person’s cold cases.
In addition to The Mona Lisa Sisters, George has written a historical crime novel, is completing the second novel in the Liberty – A Hector Miguel Navarro Novel trilogy, as well as numerous short stories. He has had eight pieces published in anthologies and one in 0-Dark-Thirty, the literary journal of the Washington, D.C., based Veterans Writing Project.
If you would like to host George on a blog, give him a shout at gdcramer@msn.com

Jackie Houchin said…
A very interesting background has George Cramer. Soldier, sailor, policeman, author. I hope we will see the other stories soon, especially that TRILOGY he spoke about.
Thanks for hosting Mr. Cramer on your blog!
August 8, 2020 at 3:36 PM

Thonie Hevron said…
George's post is an excellent example of how important mentorship is for writers. I count my most significant moments as a writer when (former writing instructor) Pat Tyler encouraged me, pointed out places where the scene could be beefed up, and generally smiled at all the right times. I feel privileged to count Marilyn Meredith as a mentor. Her energy propels me into the chair!
Thanks for your post, George.
August 9, 2020 at 1:33 PM 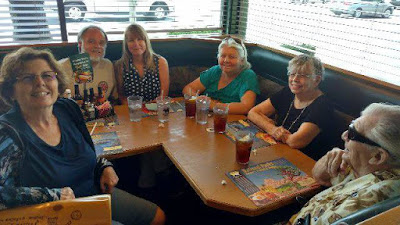 We recently had lunch with our girls. Dana is the one on the left, then Rick with youngest daughter, Lori, middle daughter, Lisa, and of course, my hubby and the girls' dad.

Dana was my very first, and I knew nothing about babies. Because she was born in Cambridge Maryland, 3000 miles away from my family, I relied on a Good Housekeeping Book about raising a baby.

She has always been as much a friend as a daughter.

I was the leader of her Blue Bird and Camp Fire Group all through high school until all the girls graduated. I had as much fun and learned more that they did.

When planning for her wedding, believe me we had little money, she made her own dress and most of the bridesmaids' dresses and the flower girl's. The theme was daisys and we picked them from a neighbor's yard. I cooked all the food for the reception, and a neighbor made the wedding cake. Everything turned out beautiful.