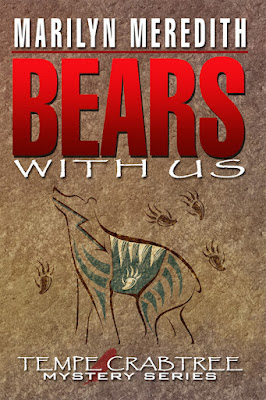 To buy: https://www.amazon.com/gp/product/B07RM56RRB?pf_rd_r=CTTBDRYJW9B42EPS7YDY&pf_rd_p=8fe9b1d0-f378-4356-8bb8-cada7525eadd&pd_rd_r=1cac7046-dda0-4b88-b49d-ae51de36db9d&pd_rd_w=i8xsR&pd_rd_wg=8qVbe&ref_=pd_gw_unk
The Deputy Tempe Crabtree mystery, Bears with Us, was inspired by a couple of bear visits to our area.  Plus, I got some interesting information about bears habits who hang out where humans live from my police officer grandson who dealt with bears when he worked in Aspen Colorado.
Because of the recent fire in the Sequoia National Forest that is above where we live, bears have come down into Springville where we live. Over the years, bears have visited out town off and on. But this year there seem to be more bear sightings than usual.
A big black bear has been seen several times at the dump, especially on a Friday when there is lots of trash to go through. There have been many reports of a big black bear going through trash on many of the roads, and one has been seen strolling down the street.
A mother bear and her cub has been sighted several times.
My grandson-in-law, while driving to work early in the a.m., struck a big black bear who seemed to come of nowhere. The bear ran off, and the car has a permanent dent though still runs fine.
The other night, dogs barking alerted our granddaughter, her hubby and family to the fact, a big black bear was rummaging through our trash trailer. Because granddaughter took a video of him, I got to see prook that we did indeed have a big bear visitor. What a mess he made. He came back the next nigh too, but nothing fresh had been put out there.
Bears aren't the only wild animals that have been seen. Folks are reporting seeing lot of deer,  coyotes, a mountain lion, bobcats, foxes (granddaughter's family spotted a silver fox). Because of the fires, water and food are in short supply, so I suspect the wild life will continue to hang around.
Life in the foothills is always interesting.
Marilyn
Again. Deputy Tempe Crabtree mysteries. Bears With Us

Anonymous said…
Once again, your writing and your blogs never cease to inspire me. I hope you're working on the next one.
September 20, 2021 at 11:03 AM

giftalworld news said…
Thank you so much for spending your precious time to write this educative article. Good Morning Messages for Friends
September 23, 2021 at 9:00 AM