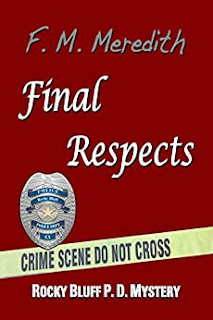 When I wrote Final Respects I had no idea it would be the first of the long running Rocky Bluff P.D. mystery series. If I had, I might have done things differently--or maybe not. It's a tale incorporating the murder of a much loved police officer, a disturbed man wanting revenge, a mortuary, and much, much more.
When writing this book, I fell in love with the characters and wanted to know what happened to them next. Hence came Bad Tidings, then the next one and the next.
Since it takes about a year to write a book, and sometimes longer to get it published, more time went by in real life than in the series. Major changes happen--at first there are no cell phone or internet and technology develops, making some major changes in our lives and eventually in the lives of the police officers I write about.
Because of the fact, the department is woefully undermanned and underfunded--especially in the later books, RBPD must rely on others for help like the coroner and forensics. I am happy about this because it keeps my detectives solving crimes the old-fashioned way: following clues and interviewing people.
In this work of fiction, my characters are not aging as fast as people in real life. If you decide to read the whole series, remember this.
Marilyn who writes the Rocky Bluff P.D. series under the name F.M. Meredith
And don't forget, Angel Lost is only .99 cents for Kindle:
.https://www.amazon.com/Angel-Lost-Rocky-Bluff-Mysteries-ebook/dp/B089RP1VYL/ref=sr_1_1?dchild=1&keywords=Angel+Lost+by+F.+M.+Meredith&qid=1633711180&s=digital-text&sr=1-1 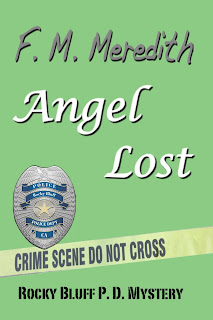