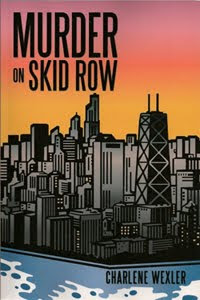 Murder on Skid Row
is a fascinating story of a young dentist who starts his practice in the worst possible skid row in Chicago. He meets a variety of quirky folks, many homeless and on drugs or alcohol. Despite the danger he finds himself in on nearly a daily basis, he continues to do dental work for the needy.

I had the privilege of interviewing the author, Charlene Wexler.
Here's the interview:

Marilyn: Tell me a bit about yourself, Charlene.

Charlene: I'm a native Chicagoian, now retired on the Illinois/Chicago border. Have been a teacher and a dental office manager before becoming an author. I have a son, daughter-in-law and three adorable grandchildren living in Arizona.

Marilyn: When did you first realize you wanted to be a writer?

Charlene: Always wrote as therapy. About five years ago, in retirement some of my funny stories were published in magazines, and I got started.

Marilyn: I've read Murder in Skid Row which certainly depicted that area during the time period in a vivid manner. I kept having the feeling it might be based on a true story. Was it?

I asked this question at an earlier time, and she said the story was based on something that happened to her dentist father when he first started out.

Marilyn: Where can my readers find your book?

Charlene: Most bookstores will order it, Amazon.com, Barnes&Noble.

Marilyn: What are your future writing plans?

Charlene: I've finished a 290 page woman's story, and am looking for a publisher now.

Marilyn: Is there anything else you'd like my readers to know?

Charlene: I have a web site: http://www.charlenewexler.com/writings.html