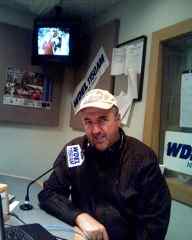 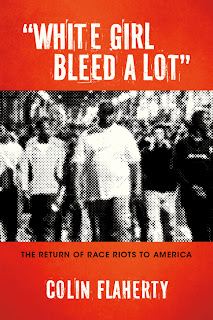 
White Girl Bleed a Lot: The Return of Race Riots to America.


A book review by Dan Auld


When Colin Flaherty set out to write a book about an explosion of racial violence in this country over the last two years, he was often met with two reactions: Denial. Or explanations.


“Often at the same time,” Flaherty said. “The same people who denied it in one breathe, explained it in another. Strange. That’s why I wrote the  book. There are hundreds of cases of racial crime and violence in more than 50 cities in the last two years, and no one is talking about it.”

From White Girl Bleed a Lot: The Return of Race Riots to America:

Local media and public officials are often silent. Crime is color blind, says a Milwaukee police chief. Race is not important and if you notice, you are a racist,  a Chicago newspaper editor says.

A police chief said he knew what was responsible for a tsumami of violence: Sarah Palin.

And don’t call them flash mobs. “That is just another way to deny and marginalize what is happening,” he writes.

The cases are too frequent too ignore.  And it is not just Philadelphia and Chicago and New York. That’s what makes it strange: it is also happening in some very unlikely places.

In Iowa, more than 100 black people roamed the grounds of the Iowa State Fair beating and stealing. A police report said some of the black people had declared it was “Beat Whitey Night.”

In Wisconsin, a group of almost 100 black people looted a convenience store, then beat up a group of white teenagers. One of the black people stood over a victim and said “White Girl Bleed a Lot.”

The list goes on: Indianapolis. Denver. Rochester. Boston. Miami. Houston. Atlantic City. Rehoboth Beach. Dover, Delaware. Charlotte. San Francisco. And on and on and on.

Flaherty is not in the explanation business. Nor does he want to be. “That is for another book, someone else’s book,” he said. “The purpose of this book is to settle once and for all whether there has been a tsunami of racial violence in this country. And there has been. And to deny it, as many have, is to recreate the punch line of the old joke: Who are you going to believe, the people who say it is not happening, or the lying videos on YouTube.”

“America is the most race-conscious country in the world,” he wrote. “And we see that every day in every newspaper with stories about black unions, black caucuses, black teachers, black students, black neighborhoods, and on and on. Everything except black violence. That is taboo. But until we recognize it, we can never do anything about it.”

Flaherty makes a persuasive case that without YouTube and talk radio and citizen journalists with cameras, it would have been impossible to make the case.

Baltimore is a good example. In April of 2011, more than 100 black people raged through the Inner Harbor area, with vandalism and violence in their wake, including one stabbing.

News accounts from the Baltimore Sun do not specify the race of the people doing the rioting.

But curiously, the paper quoted the head of the local NACCP saying just because the rioters were black, that doesn’t mean the riot was racial.

That is how strange and powerful this is: People are denying charges before the charges are made.

The book features chapter on racial violence against gays, women and Asians that is especially troubling.

This is a challenging book. An interesting and powerful and ultimately persuasive book by a great American writer not afraid to look at one of the most thought about but unspoken features of American life.


Colin Flaherty is an award winning reporter whose work and by-line has appeared in more than 1000 news outlets, including the New York Times, Los Angeles Times and just about everywhere in between. He is the author of White Girl Bleed a Lot: The Return of Race Riots to America. (http://www.WhiteGirlBleedALot.com)
He is also the author of Redwood to Deadwood: A 53-year old dude hitchhikes around America. Again. (http://www.RedwoodtToDeadwoodBook.com) He is a former ghost writer for the first black chairman of the U.S. Commission on Civil Rights. His story on a black man unjustly convicted of assaulting his white girlfriend was the subject of a stories in the national media, including a one hour special on Court TV.

Unknown said…
This is one of Mr Flaherty's documents about so many race riots involving violence, vandalism, and mob beatings of non-blacks. "This is a challenging book. An interesting and powerful book by a great American writer not afraid to look at one of the most thought about but unspoken features of American life." White Girl Bleed a Lot: The Return of Race Riots to America http://whitegirlbleedalot.com/ And how the media ignore it? Flaherty also exposed how media, local police, and politicians refused to talk about the racial aspect of the incidents. The ebook has many clickable links for video and photo which makes it really interesting.
July 14, 2012 at 3:42 AM