ON A DESERT SHORE, by S.K. Rizzolo 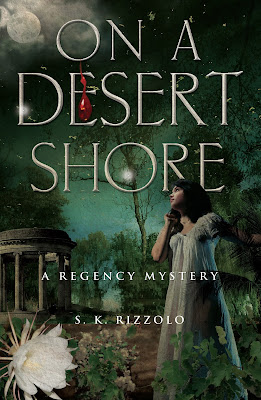 I never know where a novel will take me. My mystery series, set in Regency England, requires copious research that has a way of sending me off on byways and detours. One hard lesson learned has been that I have to trust the process. Sooner or later the logic and, more importantly, the heart of a story emerge. Often this happens later rather than sooner. Basically, there’s a lot of floundering involved. Sometimes I stumble on magical tidbits that seem to shout, “Pick me! I’ve been lying here in this dusty book for centuries” (or nowadays hiding in Google Books).  And that’s really fun.

Context is especially crucial in a historical mystery. Historical novelists ask readers to believe that our characters inhabit a world that is long gone yet still echoes down the years into the present. It’s tricky. If a writer tells everything she knows, the book sags under the weight of the research. I try to write from within that early 19th-century mindset without ever forgetting that the characters and the mystery are the main event.

My most recent book, On a Desert Shore, presented a special challenge in that it explores race and attitudes toward slavery—the great moral issue of the Georgian era. Many of the characters in this book are from Jamaica, an astoundingly savage society that was coming under increasing scrutiny in the “mother country” for its cruelty toward the slave population. Though England liked to think of itself as civilized and enlightened, my research revealed that many English men and women were well aware of the gap between national mythology and brutal reality in Britain’s far-flung empire.

On a Desert Shore is about what happens in England when rigid boundaries between different races and cultures dissolve. One of the suspects in Bow Street Runner John Chase’s murder investigation is a mixed-race teenager named Marina Garrod, born to a wealthy Jamaican plantation owner and his slave-housekeeper. This young woman becomes a pampered heiress in London society, discovering that she can’t leave her past behind. It took me a while to get to know Marina in order to pursue my goal of telling her story with empathy and respect, but once I finally figured out that she is the heart of the story, everything fell into place. There were a number of these mixed-race children whose fathers sent them “home” to England, where they might hope to encounter less open prejudice and live in a free society. On the whole these children were the lucky ones. While Britain had halted its participation in the slave trade in 1807, slavery itself endured for several decades more in the colonies. And, shockingly, the government provided thousands of ordinary English people with financial compensation when they were forced to free their slaves.

So I never know where a book will take me. But I can be sure that the journey will bring some wrong turns in my quest to get the history and the story right.

Protecting an heiress should be an easy job for Bow Street Runner John Chase. But the heiress—daughter of rich London merchant Hugo Garrod and a slave-housekeeper on his Jamaican property—is no conventional society miss. Educated to take a place among Regency England’s upper crust and marry well, she has failed at London’s social scene and lives isolated among the Garrod family in Clapham. And someone is playing her malicious tricks, some of which recall her island heritage of Obeah.
Blurb: John Chase needs to determine whether Marina is indeed a victim—or is herself a delusional and malicious trickster. If the trickster is real, is it her rejected suitor and cousin Ned Honeycutt? His demure sister? Their devoted aunt who acts as the Garrod housekeeper? A clergyman friend? Everyone around Hugo Garrod has a stake in how he disposes of his immense wealth.
Meanwhile Mrs. Penelope Wolfe, an abandoned wife, flouts convention by earning her living with her pen. She’s in love with barrister Edward Buckler and hesitant to further scandalize society by breaking any more rules. Hugo Garrod invites her to join his household and put her pen to work. Her assignment takes her into an exotic world where menace lurks at every turn of the garden path and the façade of propriety masks danger.

To solve the case, Chase must grasp the enigma of Marina, an expert in self-concealment, who challenges his assumptions and confronts him with difficult truths. And, with the aid of Penelope and Edward Buckler, reveal a clever killer.

On a Desert Shore stretches from the brutal colony of Jamaica to the prosperity and apparent peace of suburban London. Here a father’s ambition to transplant a child of mixed blood and create an English dynasty will lead to terrible deeds. 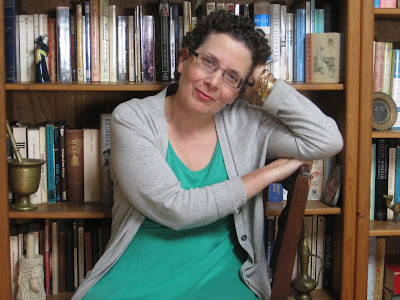 Bio:
S.K. Rizzolo has a lifelong fascination with Regency England. In college she majored in English with no clue as to how she meant to support herself, eventually earning an M.A. and becoming an English teacher. The Rose in the Wheel, Blood for Blood, and Die I Will Not are the first three novels in her series about a Bow Street Runner, an unconventional lady, and a melancholic barrister. The adventures will continue in March 2016 with the release of On a Desert Shore.

A Regency Mystery On a Desert Shore by S.K. Rizzolo