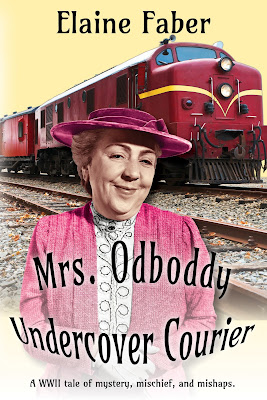 A review of Mrs. Odboddy, Undercover Courier by Elaine Faber

The story is set during World War II. Agnes Odboddy, the heroine, is an elderly widow with an overactive imagination. An invitation to accompany the president’s wife, Eleanor Roosevelt on a goodwill trip is forefront in her mind until Colonel Farthing worth of the nearby Army base brings her to his office in a most unorthodox manner. He sends Mrs. Odboddy on a mission to deliver a package to President Roosevelt, not an easy task.

Before she even begins the trip, the enemy tries to discover and steal the package. Accompanied by her niece, Katherine, the two women begin their trip by railroad—a trip filled with danger. Mrs. Odboddy realizes she is being shadowed by a man—a man whom she suspects of being a spy and a murderer.

She and Katherine encounter others on their trip who may or may not be a threat to both of them. Mrs. Odboddy takes a harrowing detour, and when she and Katherine finally reach Washington D.C. they find they are still in danger.

This is a delightful and at times funny tale, filled with the problems civilians faced during the war years, plus the unusual and dangerous venture faced by Mrs. Odboddy. Despite her age, she manages to thwart her enemies even when under physical attack. 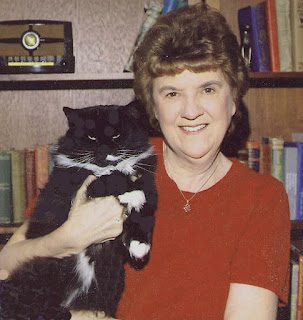 Jackie Houchin said…
Oh my goodness these sound so cute and good. it reminds me of a story I've got started (not a book) about a returning CIA agent, now in her 70s, but just as spry and observant. Her name is... Norma Pink

I will check out these books. Thanks marilyn !

Jackie Houchin said…
Oh dear.... I just discovered this is available only on Kindle. I don't do Kindle anymore. Well.... maybe some day.

Eliminate your office password
When you sign in to any Microsoft service, quickly and securely verify your identity
with the Microsoft Authenticator app on your phone.
Your phone provides an extra layer of security on top of your PIN or fingerprint. Available on iOS and Android.
For More office.com/setup

Gloria Jenkins said…
Epson technology crashes can be very deadly if you don't repair an ASAP operation. We propose that you take Epson Printer directly from the Epson support team if your device is in the warranty period. But you benefit from technical assistance from third parties if your warranty has already expired. You can visit our site for more information.
Get More info: https://epsonprintersupports.com/
November 30, 2020 at 8:38 PM

Carl Wood said…
In this page given you enough instructions and guidelines for troubleshooting offline printer problems. However, if you still have queries related to the topic or you want to get more information about the same then it is recommended to visit our site and you can go through the pieces of information in the forms of blogs and articles on the website.
visit our site: Fix Printer offline
December 26, 2020 at 12:33 AM

Online Assignment Help said…
History assignment help from GreatAssignmentHelp.com guarantees you to accomplish the best checks. The accomplished group history mentors from Great Assignment Help convey Professional History Assignment Help in your given time. Our experts have encountered history essays help writers who can deal with any difficult history schoolwork assignments.
January 11, 2021 at 5:46 AM