THE GOURMET GANGSTER, Mysteries & Menus by the Family 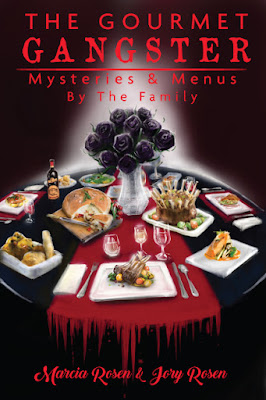 My son Jory and I had a great time collaborating on this book.  I wrote the mysteries and he provided the recipes. Together we created some murderous titles for the recipes and decided which types of food would best fit the various mystery stories.
Some of my stories were influenced by being a gangster’s daughter.
Really. My father was a gangster.
He was a bookie, owned a gambling ‘place’ and when he was ready to move on, he and his partner opened a restaurant and bar at the heart of Main Street in Buffalo, New York.
The book is a series of short mysteries all taking place in a restaurant called Manhattan Shadow. The character, Zero the Bookie is fashioned after my father. He also appears in my Senior Sleuths Mystery Series along with Dick and Dora Zimmerman, reminiscent of the Thin Man characters.
Level Best Books, our publisher, suggested putting the recipes before each story.
And so we did, with titles such as:  “Chicken Piccata Caper,” “The Sacrificial Lamb,” “The Quiche (Kiss) of Death.” Near the end we added, “A Deadly Delicious Dessert.”  Donuts

The stories are from my vivid and sometimes frightening imagination, played out for the pleasure of mystery lovers.
Really, I’m deadly serious!
The mysteries are malicious. The recipes are delicious.”--John Klopfenstein, Criminal Defense Attorney~ Carmel/Salinas, California

by Marcia Rosen and Jory Rosen Mystereis and Menus by the family. The Gourmet Gangster